"You made a difficult task so much easier that I thought it would be." read more... 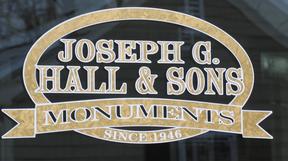 Mr. Hall owned and operated Joseph G. Hall Monuments and Hall Funeral Car Co., both in Grant City. The funeral car company was closed in 1996 after seventy years of operation. Mr. Hall owned the monument business for fifty-six years. In the 1980s, he opened the Joseph G. Hall and Sons Monuments, Pleasant Plains; it is now owned and operated by his grandson, Brian Hall.

As an active member of the community, Mr. Hall was well known for making donations of headstones and monuments to religious organizations and veterans' groups.

In one case, Mr. Hall and his grandson, Brian, helped answer the Christmas wish of a seven-year-old South Beach girl who wanted a tombstone for her mother who died in 1991 of liver cancer.

Nikita Vicidomini wrote a letter to Santa Claus in 1993 asking for a headstone for her mother's grave in Resurrection Cemetery, Pleasant Plains. Her mother, Annette Vicidomini, died at the age of twenty-six. Nikita's story was published in the Sunday Advance after Hall Monuments agreed to help her. For their donation, Mr. Hall and his company in 1995 received the Monument Builders of North America's first place "News Media Award."

In 1997, Mr. Hall donated a monument "in memory of those lost to abortion," outside the Richmond headquarters of the Father Drumgoole Council, Knights of Columbus, Richmond.

In 1996, he donated a memorial erected at Curtis High School in memory of those killed at Pearl Harbor.

In October 1999, Mr. Hall donated a 20- by-4-foot sign of solid granite overlooking the Staten Island Expressway for Mount Manresa Jesuit Retreat House in Fort Wadsworth. This was the second of two signs he donated to the retreat house. The first was destroyed eight months earlier by a speeding stolen car, according to an article in the Advance in October 1999.

The Rev. John Ryan, director of the retreat house, was quoted in the Advance as saying: "The stone work around the sign was demolished. But Mr. Hall's sign remained intact. It's just like Joseph Hall; it may last forever."

Among his other charitable acts was partially restoring cemetery markers at Sandy Ground, assisting with the Korean War Veteran's Memorial outside the Petrides School in Sunnyside, and donating headstones for firefighters and police officers who died in the line of duty.